We got yet another train from Agra, across Northern India, to Varanasi. The train ended up being 4 hours late so our total travel time was around 16 hours and we arrived to utter chaos. Varanasi was so much busier than anything we’d seen in Rajasthan, even Dehli! We discovered that there were local elections going on the day we arrived and lots of streets had been closed off. Our tuk-tuk driver dropped us off about 2km from the hostel so we had to walk with our backpacks, through the chaos and closed streets under the mid-day sun. I think a march, demonstration or protest can be a little scary and overwhelming anywhere in the world, it’s why I’ve avoided quite a few that I would have liked to attend, even in London. When it’s in a foreign country, in a foreign language, on a topic that you’re completely ignorant about, it’s quite terrifying. We had absolutely no idea what anyone was saying, and we couldn’t even gage if it was peaceful or not. We saw lots of policemen with what looked like baseball bats rather than batons and also lots of normal people just casually walking around with shotguns slung over their shoulders.

Varanasi itself is the Holy city; a place where Indian families come to cremate their dead and scatter their ashes in the river Ganges. I naively thought a holy city would mean I would feel more comfortable and safe; completely the opposite. The harassment was nearly as bad as Dehli and again, it drove me mad.

There are of course some positives to Varanasi too. We were astounded by the landscape, maybe cityscape is a better word. The city side of the Ganges is crammed full of tower block buildings. Crammed to the point that you can only get around through narrow streets that even tuk-tuks can’t fit in to (you wouldn’t believe how many times we got lost in these little meandering streets). It is an immense concrete jungle all the way up to the river’s bank, but then, you look across the river, and it is completely flat. There is nothing there; untouched, pristine. It’s very surreal. We got a boat to the other side one evening at sunset, it seemed even more utopian from the water and the flat side.

You see everything on the banks of the Ganges; it’s where people burn bodies, go to the Ghats, wash themselves, wash their clothes, hang laundry, sell their goods, have performances and my personal highlight, where water buffalo go for a dip. Though it is a very common tourist practice to watch a burning body, we decided against it. We did however watch an Agni Pooja. A ceremony, that at the time we had no clue what it was about and which we later learnt was to worship the god of fire. There were thousands of people watching this ceremony, half on land, and half in boats on the river.

On the morning we were due to leave Varanasi, I woke up to horrific food poisoning (I mean I went to the toilet 16 times in about 2 hours). Fun fact, we were in an 8 bed dorm at this point, 2 bathrooms shared between 16 people, I’ll just leave it there… I was extremely weak with a high fever and was struggling to keep my eyes open. Dave had to carry both our backpacks and I just stumbled after him. I should have been in bed with a cold flannel over my head but oh no, instead, we had to get an hour long tuk-tuk ride to the airport (no taxis to be found), a 2 hour flight to Mumbai, a 2 hour layover, another 2 hour flight to Kochi and finally an hour drive to the accommodation. I think I boarded both planes wrapped in my silk liner sleeping bag I was shivering so much. Safe to say, it was my least favourite journey. But we made it to Kochi! We’ve seen it spelt various ways, Cochin is the colonial name given by the British. It is in the Southern state of Kerala which is also known as “God’s own Country”. Kochi is beautiful and reminds us a lot of our trip to Barbados a few years ago. There are palm trees and coconuts galore. It is so much more relaxed and less chaotic. I haven’t been stared down or harassed and we’ve barely had any tuk-tuk drivers hassling us! It honestly feels like a different country to Northern India. Unfortunately, we haven’t been out much to enjoy it. The day after we arrived, Dave too got gastroenteritis, probably from me, (soz Dave). I’ve been ill for 3 full days now and I’m only just starting to recover, Dave’s on day 2 so a bit behind. We’ve both been so tired and weak that we’ve just slept most of the time and occasionally ventured out for food or water or to watch the sun set over the ocean. We’ve had some nice gentle strolls along the beach and the lanes (where I’ve been shat on by birds not once, but twice). We found a cafe that feels as though it could have been transported straight from Shoreditch, East London (a welcome break though, I thoroughly enjoyed my pretentious avocado and poached egg on toast, in full A/C whilst listening to The Cranberries).

Tomorrow, we get a bus onwards to Munnar. We have about a week and a half left here in the South and we plan to visit 5 more places!

Old McDonald had a farm?

Dave on the other side of the Ganges

Sunset over the Ganges

Laundry on the Ganges banks 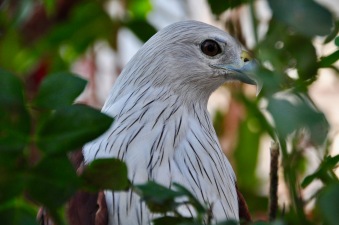 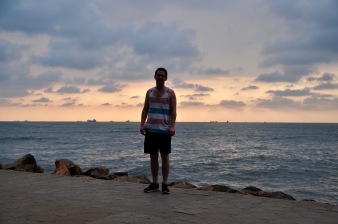