We left Cairns on our first Grey Hound Bus of the East Coast, a perfectly comfortable coach with a toilet and dodgy wifi on board. We headed 6 hours south to Townsville. By the time we arrived, it was quite late so we just checked in to our dorm and had an early night. Townsville was just our stop over town before we caught the ferry to Magnetic Island.

It’s a beautiful, scenic, 20 minute boat ride to get to the island at $33 return. You can get a hop on, hop off bus around the island for $7 a day which is quite reasonable too. We jumped on the bus and dropped our bags off at our accommodation C-stay. We chose this one because it was the same price as getting 2 beds in a dorm but instead we got a private room. It’s in Picnic bay which is one of the quieter areas of the island with practically no night life (perfect for us OAPs). We headed out to explore the island and for a day that would turn out to be one of my favourite days of my life! We had a potter around the beach at Picnic Bay before hopping on the bus to an area called Arcadia where we had a nice lunch in the sunshine. Then the wildlife spotting began; starting with the neighbouring Geoffrey Bay which is infamous for its wild rock wallabies. We brought some carrot sticks to feed them but we weren’t sure if we would see any as they are nocturnal. We were thrilled when we saw about 15! They sort of look like mini kangaroos and most of them were half asleep with eyes lulling closed. Even though they are wild, they are fairly tame because they are so accustomed to humans coming to visit them.

We then got the bus further up to the start of our afternoon hike. As we were waiting for the bus, we saw beautiful rainbow lorikeets in the trees which was a nice surprise as we didn’t know they were on the island. The afternoon hike we did is called The Forts Walk where you go up to see the lookout towers used in World War 2. What’s special about this walk however, is that you can sometimes see wild koalas in the eucalyptus and gum trees! It’s interesting to think how I’ve changed as I get older, when I was younger, my dream was to hold a koala, but now my dream is to see a koala in the wild. We tried not to get our hopes up as again, koalas are nocturnal and are only active at night, we’d been warned that they are quite hard to spot though other trekkers sometimes lay stones and branches when they see a koala in a tree. Anyway, we started our ascent and it wasn’t long before we saw our first little koala asleep in the tree. It was absolutely amazing! I’ve never seen an animal that resembles a cuddly toy version of itself so much, it’s fur and ear fluff doesn’t look real! We went on to see about 5 more along the trail. We also saw an echidna which is Australia’s mini anteater/porcupine-type creature. It sort of looked like a wobbling pinecone but managed to see his little face with a pointy nose. The lookout towers were really impressive too, we timed it to perfection and got to the top of the Forts circuit just as the sun was setting so we had a spectacular view of the bay and all the surrounding trees dipped in golden sunlight. We were a little bit on edge climbing up the last stone steps of the forts because there were signs saying that Death Adders (one of the most deadly snakes in Australia) are present in the area and can sometimes be seen lingering on the steps. We definitely heard one or two but didn’t see any, nor get bitten, so that was good. We did however see another little rock wallaby. We saw the koalas on the way back down again, this time it was dusk and some of them were awake and slowly munching on eucalyptus leaves. Once we got back down to the bus stop, the sun had nearly completely set so it was quite dark except for this incredibly vibrant full moon. It looked like a super moon, definitely the largest I’ve ever seen it! It was quite cool to turn one way to see the last of the fiery orange sun and then turn 180 degrees to see the white glow of the moon. The only bad thing about the most amazing wildlife afternoon walk was that we got bitten alive by evil mosquitos, but it was such a good day, I’ll let the bites slide.

We stopped off at Nelly’s bay which has the main super market and got supplies for the next few days. Though we’d only booked one night, pretty much as soon as we arrived, we knew we’d want to stay at least another. The buses only run every hour so we had a little bit of a wait and it had dropped really cold. When we finally got on the bus, we were the last ones on by the end and the bus driver asked us where we were staying and he very kindly dropped us off right outside our accommodation! Imagine that happening in England! We had a nice spaghetti bologanese that we cooked in the hostel’s shiny, amazingly well-equipped kitchen. To end the day with even more animals, we saw a wild possum on the stair case. I know they’re considered pests in Australia but it was so cute and really inquisitive coming right up to us. Best day ever!

The next day, we decided to do the 4 bays walk (technically 5 bays). This walk was around 8km of either steep descent or ascent, barely ever flat, though fortunately more downhill than up. We’d been told that you’d be lucky to spot a koala as this path allowed motorised vehicles whereas the Forts walk didn’t. We were thrilled to see not one, but two koalas and one of them was so low down in the eucalyptus tree, he was basically at eye level! I took my best wild koala photographs of that one (see below)! We also saw another wild echidna shuffling around the leaves.

The bays we visited were: Arthur bay, Florence bay, Radical bay, Balding bay and Horseshoe bay. We had a lovely day pottering between them, chilling on the beaches and having a picnic lunch. We didn’t bring our swim stuff because we thought it’d be too cold without a wetsuit and I wanted to bring my big camera in case we saw more koalas (so glad I did). Each bay was as picturesque as the other with gentle waves lapping the curves. Florence bay’s tide was extremely low and had formed beautiful branch-like tracks in the sand where the last of the water prevailed. On our final stop at Horseshoe bay which is the biggest with the most anchored boats, we saw the rainbow lorikeets again, some were mating!

We caught the bus back to the hotel where we ate in again but on the walk back, I was so excited to see a Kookaburra! Sadly I didn’t get the perfect photo (see below) but hopefully we’ll see others as we continue around Australia!

Happy with his carrot stick

You looking at me? 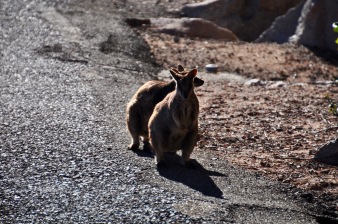 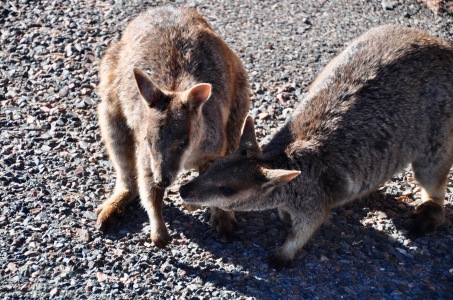 Awoken from his slumber 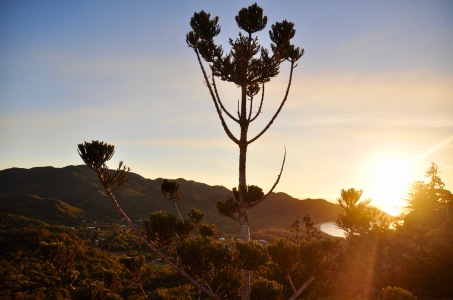 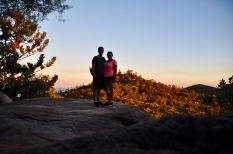 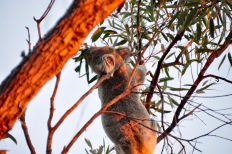 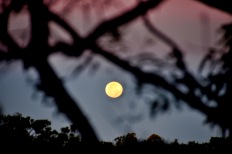 The moon is cheese 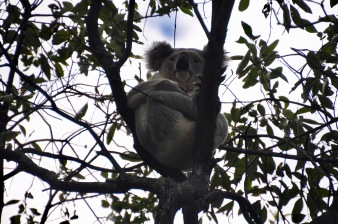 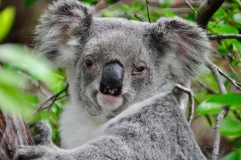