We checked out early from our hostel in Sydney central, went to the station and headed for the Blue Mountains. There’s only one train an hour and by fluke we arrived in perfect time, 3 minutes before departure, winning! I’m still amazed how ridiculously easy and convenient it is to get right in to the heart of the blue mountains, in 2 hours, on a direct train from Sydney central!  We arrived in Katoomba, the main mountain town and were quite surprised by how big it was. There were quite a few coffee shops, 3 of the main big supermarkets and awesome street art. We weren’t able to check in till 1 so we just did a quick food shop and cooked lunch at the hostel, chilling in the lounge until we could put our stuff safely in the dorm. The hostel was honestly amazing, one of our favourites of all time I think. It was Blue Mountains YHA if you’re wondering, it was so relaxed and had a huge communal area with cosy sofas and real log fires which was so nice and homey in the cold mountain environment.

We went out in the afternoon for our first exploration of the Blue Mountains (apparently named because of the way we see them on the light spectrum, making them appear blue in the distance). We started by walking to Echo Point, the main viewing platform to get a good look at the area and specifically the Three Sisters (3 iconic rock structures). Legend has it that the three stones are actually 3 beautiful women who were turned to stone by the aboriginal village elder because they wanted to marry outside their tribe. Anyway, I digress, the view was absolutely spectacular. I mean really, put the Blue Mountains on your bucket list. It was already well into the afternoon so we didn’t want to risk getting caught in the dark on a hike so we just did a gentle one called the Prince Henry Cliff walk. This one goes from Echo point along the top of the cliffs towards a cable car that you can get up and down the valley. All along this path, you get to see the valley lined with what looks like a billion trees and the surrounding mountain landscape, one of the most scenic walks we’ve ever done.

The next day we got up and made a packed lunch for what would be the most intense hike either of us had ever done! Intense because it was marked as a “hard” level hike, there were a lot of parts where it was just a cliff drop edge, the walk was sandwiched by two waterfalls and though we only walked about 10 miles, it took us about 5 hours with all the ups and downs (and photo stops). We got the train down 2 stops to Wentworth falls where we started. We actually technically did two separate trails, the first was called the Charles Darwin walk (named because he visited in 1836). It was a beautiful walk following a stream that ran through a forest with little waterfalls dotted along the way. We also got to see some amazing wild Yellow-tailed black cockatoos. We could hear them squabbling well before we could spot any but we saw quite a few swooping over a steep hill covered in shrub land. Unfortunately, they were too far away for a good photo but they were beautiful! We came out of the forest at the picnic area for Wentworth falls. We followed the trail and came to the top of this huge 100 metre cascade. There’s a ridiculously steep stone staircase carved in to the side of the cliff to take you down to the bottom. Each stair was absolutely huge and both of our knees were so painful going down. Mine felt like they were going to pop or something! About 40% of the way down, I had a little panic and debated turning back because though the views of the valley and the mountains were spectacular, the steps were really terrifying! I mean there’s a flimsy railing and then you’re over a cliff. In the end, we persevered and got to the bottom. Wentworth falls looked a hundred times more impressive from the bottom up, rather than the top down. It was a spectacular site made even more impressive by the fact we could see the staircase we’d just come down on the side of the cliff.

We then began the proper hiking trail called the Scenic pass, established in 1908. This is basically a pathway cut out in the middle of the cliff for miles, you look down and you’re still hanging over a massive cliff, you look up and there are towering cliffs above and all around you. It was very surreal and a mountainous landscape neither of us had come close to seeing before. The trail itself varied quite a lot. Sometimes it was flat with railings, other times it was steep without any barriers, or we were ducking under rock paths and other times it was jumping across stepping stones under a waterfall! The entire walk was indisputably one of the most amazing things either of us had ever seen/done. We ended our walk at the Empress falls, another incredible site, but this time we had to walk up to get back to the top of the cliffs (less fun). I was absolutely shattered by the end of it and we still had to walk a few kilometres to the train station to get back. Overall, an amazing day that we will certainly remember forever! This is the route we did that day: 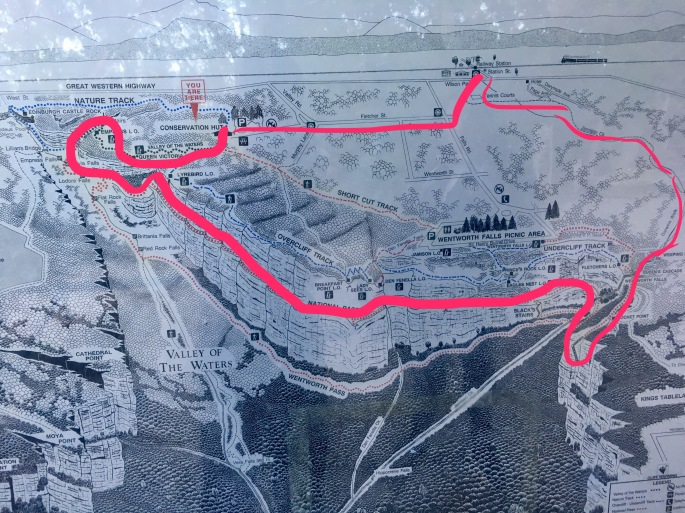 Sadly, we had to leave the Blue Mountains the next day but we decided to get up at 6am and walk to Echo Point again to watch the sunrise. It was bloody freezing and I ended up using my travel towel as a make shift scarf. When we got there, though it was still beautiful with a pale pink sky, we realised the sun probably wouldn’t rise directly over that specific view. So instead, we decided to squeeze in one more little trail called the Three Sisters walk that we hadn’t had the chance to do yet. You can actually walk onto one of the Three Sisters rocks I mentioned earlier. There were better sunrise viewing points along the way as the pathway curved us more towards the East, we could see all the trees starting to turn to life as the shade edged further away and the sunlight covered the valley. By the time we climbed down the staircase and crossed what’s called ‘The honeymoon bridge’ we were standing on one of the three sisters and we saw the sun just peek over the mountains. We sat down to watch and a little bird came and sat on my foot which completed the morning! So glad we did this at sunrise as we were the only ones on the rock and the walk at all really, I think it’s usually quite a squeeze with tourists. Not a bad accomplishment before breakfast!

Thanks for reading, join us next time for our last stop in Australia; Melbourne! 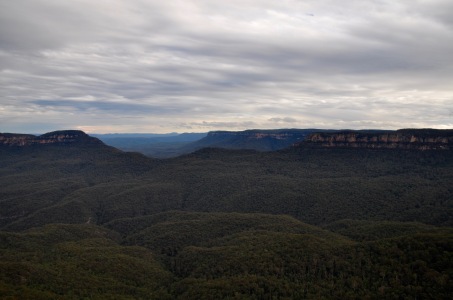 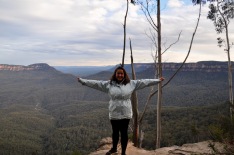 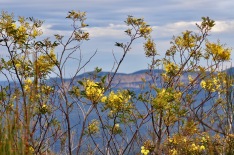 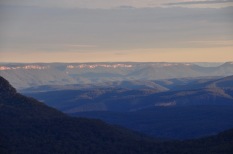 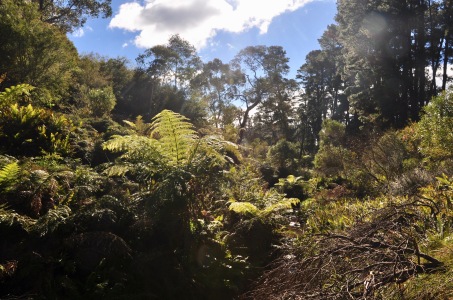 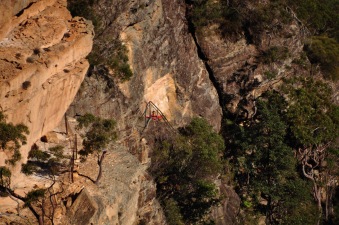 Stairway down the cliff 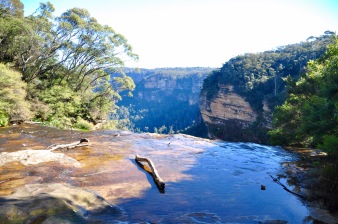 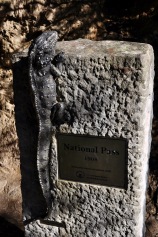 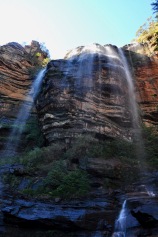 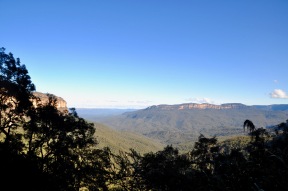 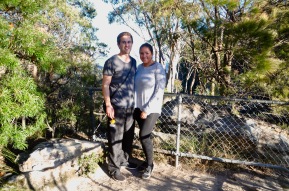 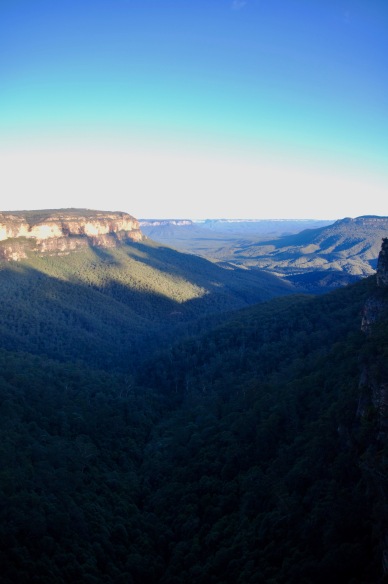 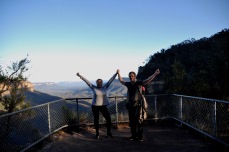 Standing on one of the three sisters