We decided to do a little weekend trip to Valparaiso after our Spanish course. The bus from Santiago was a pleasant surprise; super cheap (£5pp) and quite fancy with the bus company Turbus. Valparaiso is a seaside city, formerly the main port of Chile. Now it is infamous for its coloured houses on steep hills, street art and being a UNESCO heritage site.

We’d been told to only stick to a very small area because Valparaiso is supposedly very sketchy, but we didn’t really stick to that. I was a little cautious and didn’t walk around constantly with my DSLR round my neck but other than that, it was fine for us and we felt quite safe. Even our hostel was a little bit separate from the normal ‘safe zone’ tourist area and it was lovely. The woman who runs it was so kind and helpful and really patient chatting with me in Spanish. We also became best friends with the cat, literally the nicest cat in the world that only wanted to sit on our laps and have cuddles. We were also fairly high on a hill so we had an impressive view of the port and surrounding hills from our window.

We arrived fairly late in the afternoon, so we just pottered around our area, starting to take in the magic of the street art and went for dinner at Cafe del Pintor. It had the most impressive art murals of any cafe/restaurant we’ve ever seen (see photos below). In Chile, most places offer a set menu of starter, main, desert and drink for a fixed price, this is ‘menu’ in Spanish as opposed to ‘Carta’ which would be our version of a menu with all options. Not only the art but the food was great too.

The next day, we headed to the house of Pablo Neruda, a world renowned Chilean poet and winner of the Nobel Prize for Literature in 1971. We rode the number 612 bus to get there; notorious as an experience in itself because it goes at break-neck speed through the windy hill roads of the residential section of Valparaiso. The bus driver had one hand on the steering wheel and one on the pole to support himself when he turned corners. Pablo Neruda’s house can only be described as quirky. The shape of the house, the rooms, the furniture; everything was quirky. They had an English audio guide which was a little disappointing as I was expecting more information about his actual poetry but the tour focuses on the design of the house, how he chose to decorate it etc. It was still interesting nonetheless and had some of the best views of Valparaiso from its’ different floors. After the house, we walked through ‘the dodgy’ part of town (perfectly fine) to get back to the city centre.

In the afternoon, we did the 3pm walking tour with Tours 4 Tips. Our guide spoke perfect English and was really passionate, one of the best walking tours of this year I think. We hadn’t yet rode any of Valparaiso’s infamous funiculars that take you up to the top of various hills. Throughout the tour, we stayed predominantly on Cerro Alegre (happy hill) & Cerro Concepcion. Just like Santiago, there are so many stray dogs and cats, there were even 2 stray street dogs that followed us for the whole 3 hour walking tour. Our guide led us down some beautiful alleys where every inch was covered in some sort of art. He was knowledeagble about the street artists names though I can’t remember them now. He led us to one of the more recent murals created about a month ago which depicted all the different types of people/professions/influences in Chile – there’s even a Donald Trump in it. What was most interesting though was the firefighters at the top; apparently they are regarded as the most valiant among the Chilean people as in Chile, it is an entirely voluntary service and given that Valparaiso is a city very prone to fires, they are all the more important. He said the firefighters raise funds through raffles and that nearly everyone always donates to it.

We ended our time in Valparaiso with empanadas and tea in hand, sat on the steps of a hill with a view of the sun going down over the port.

Join us next time as we fly from Santiago up to the driest place on earth; the Atacama desert in the North of Chile. 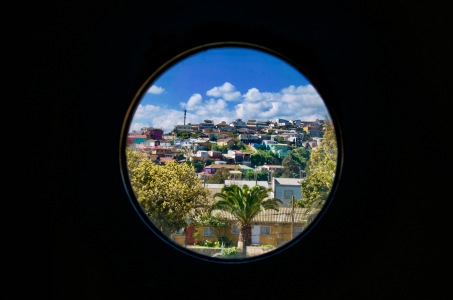 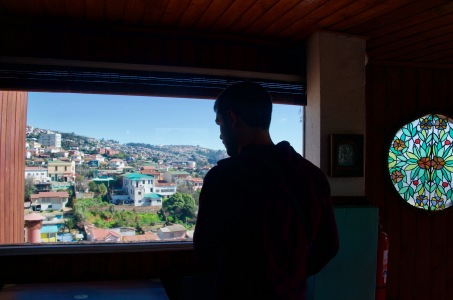 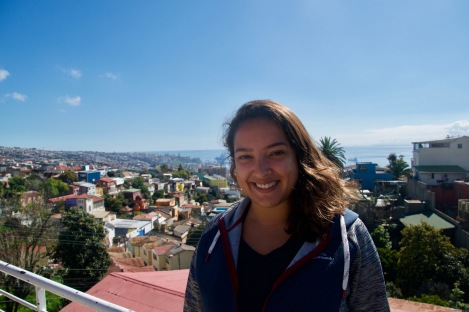 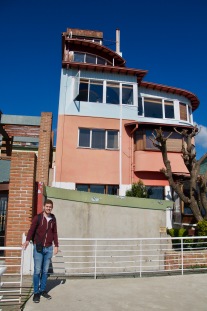 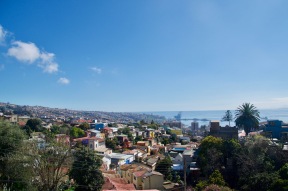 The view from Neruda’s house 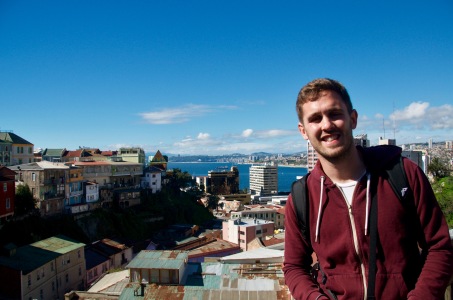 Mad house (in the middle of our street) 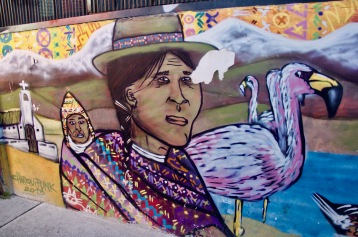 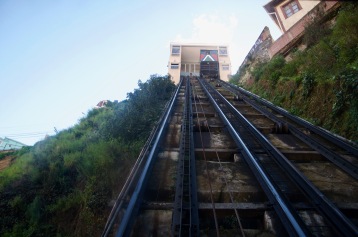 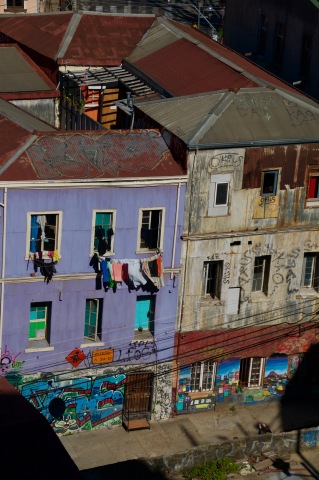 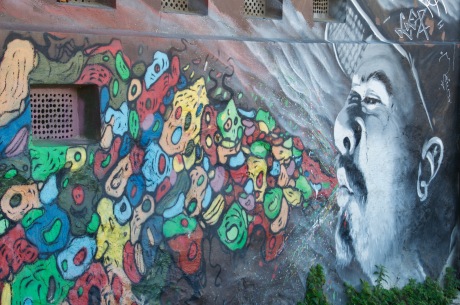 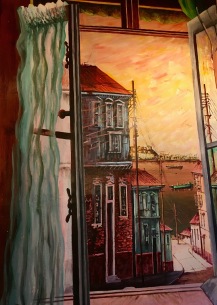 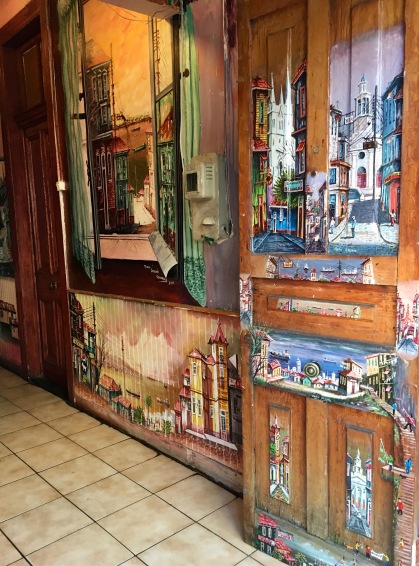 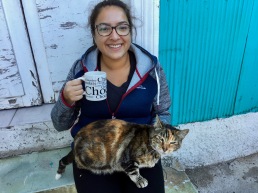 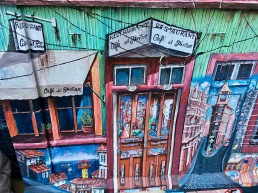 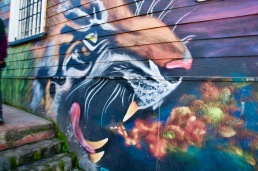 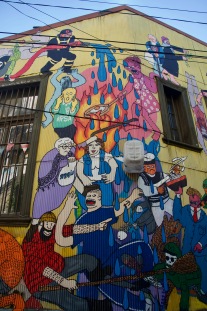 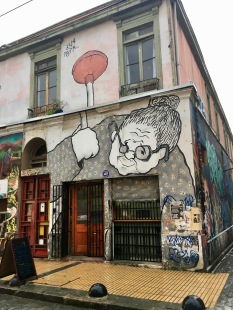 Granny to the rescue 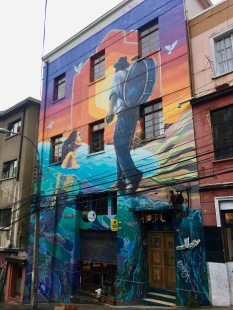 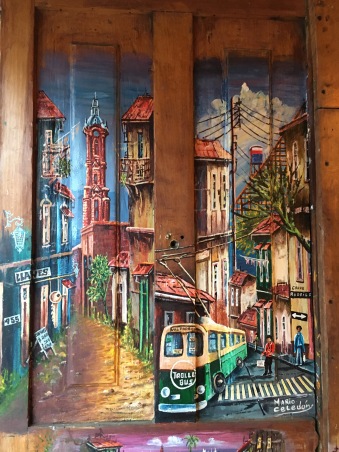 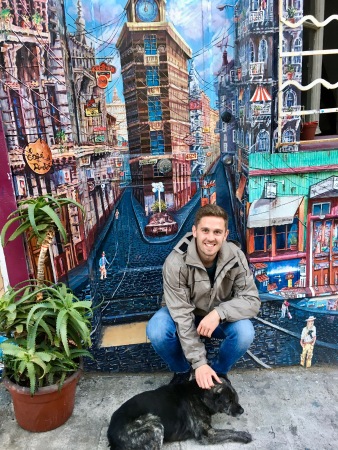