As we were struggling for time we decided to skip northern Peru and fly direct from Lima to Guayaquil, Ecuador. We were hoping to book on to a last minute Galapagos cruise before the Christmas rush. We had heard from some friends that it is quite common to get up to 50% off the original price for cruises round the Galapagos, providing you are flexible, able to shop around and play the multiple tour companies against each other. Given Guayaquil is the largest and most populated city in Ecuador, and also the closest major city to the Galapagos, we thought it would be easy to track down some tour companies and do just that. Upon arriving in Guayaquil, we inquired with the hotel staff regarding nearby tour companies and were surprised at their response that they didn’t know of any. We immediately started to doubt our decision not to head straight to Quito but wondered if the staff were just particularly unhelpful. More online research (that we didn’t do beforehand – oops) and a walk around the city, seemed to confirm that virtually all of the tour company offices are based in Quito. The distance from Guayaquil to Quito is only around 400kms though it is an 8-10 hour bus ride.

We were still able to enjoy a couple of days in the port side town of Guayaquil before moving on. One of the top rated attractions in Guayaquil is the wild Iguana park, which was conveniently located just two blocks away from our hotel. We weren’t quite sure what to expect but as soon as we entered the square, we were met with about 20 wild iguanas lazing in the sun by the side of a pond. They were absolutely massive, very surreal to see these prehistoric looking creatures in the middle of a bustling city. It wasn’t until maybe half an hour later that we looked up at some of the larger trees and noticed loads of iguanas up there, sitting with pigeons in peaceful harmony. They seemed completely unfazed by the other’s presence and we even saw a pigeon sitting on top of an iguana!

The following day we went to the board walk along the riverbank through the Malecon area. This area was part of an urban renewal project in the millennium and is now home to several parks, restaurants and bars as well as museums and galleries. As we were there at the start of December there were loads of festive decorations, including a gigantic Christmas tree and Santa’s grotto. Along the way we passed a group of young school children on a day out and were amused to seem them enthralled by a few geese whilst paying absolutely zero attention to the multiple iguanas spread out four-legged across the walkway. So strange to think an iguana is the equivalent to something like a common English squirrel to them!

The end of the Malecon board walk signifies the start of the area Las Peñas. Las Peñas is situated on a hill and is a beautiful residential area where all the houses are painted in the most vibrant colours. It reminded us quite a lot of our trip to Valparaiso in Chile some months ago. There are 444 steps leading from the riverfront all the way to the top of the hill, which has a lighthouse at the top. We were quite unsettled by the number of armed police, quite possibly the biggest police presence we have ever seen in such a small vicinity – this later seemed to be a common theme throughout Ecuador. The views from the top were nice but it was a long climb given the scorching heat to get there.

Despite Guayaquil being the biggest city in Ecuador, we found good restaurants few and far between. We were also quite shocked with just how expensive Ecuador was in general compared to other countries we have visited in South America. This may partly be due to the fact that the economy has never fully recovered from the hyperinflation in 1999 (estimated to have been around 300% in one year alone) and the subsequent dollarisation a year later. It is bizarre seeing the US dollar used as the primary currency.

We decided to brave the bus to Quito early the next day as neither of us were particularly looking forward to a rough nights sleep on an overnight bus or the prospect of staying longer in Guayaquil. Unknowingly, we arrived in Quito at the beginning of their festival of independence. The Quito festival is a 6 day event, starting on the 1st of December and finishing on the 6th, the anniversary of the city’s founding in 1534. We had booked a hostel on the edge of the Santo Domingo plaza in the historic quarter which is one of the main places the festivities occur. As we arrived, preparation work seemed in full swing and a huge stage was being erected ready for the main performances later in the week.

Quito is the capital of Ecuador and is also known as la mitad del mundo (the middle of the world), due to the fact the edge of the city extends to within 1 kilometre of zero latitude. According to Inca legend, Cusco was the centre of the universe and Quito the centre of the world. How they knew that many centuries ago is mind boggling. It also has huge historical importance, with the old town one of the largest and best preserved in the Americas. This is partly due to the fact that, along with Kraków in Poland, it was declared the first World Cultural Heritage Site by UNESCO in 1978.

We arrived in Quito late in the evening on Friday and had hoped to begin our search for a heavily discounted tour to the Galapagos the following morning. Unfortunately, our bad luck seemed to be continuing as the large majority are shut at weekends. We did however, manage to get quotes for two different 5 day cruises, although we had heard that in order to get to the more remote locations you needed at least 8 days. We decided to do some more online research so we were prepared on Monday morning to visit all of the tour companies. We spent the next couple of days meandering through the old town, admiring its beauty along with the beginnings of some of the festivities such as local dancing and brass bands. The weather had other ideas and it was amazing to see how quickly the main square emptied out as the downpours began.

On Monday, we spent virtually the whole day going between different tour companies over a 7 kilometre stretch. At first it was looking increasingly likely that we would have to settle for a 5 day cruise. However, the last two agencies we frequented both had 8 day cruises available and we decided to go with the latter through the agency Happy Gringos. We had under a week before the cruise began so we decided to book onto a jungle tour. Unfortunately, going deep in to the amazon seemed unlikely given our short timeframe so we opted to visit the Bellavista Cloud Forest instead for a 3 day, 2 nights tour, that is located a short 2 hour drive away from Quito.

Join us next time as we admire countless hummingbirds in the Bellavista Cloud Forest Reserve.

Close up of one wild iguana

Iguana hanging from the tree trunk 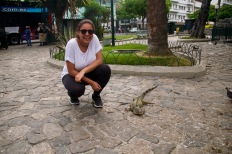 Iguanas and Pigeons side by side

Pigeons and iguanas in harmony

Iguana chilling in the tree 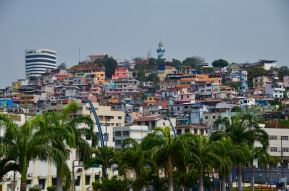 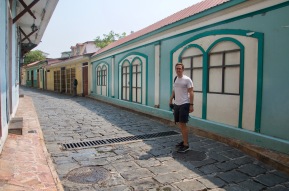 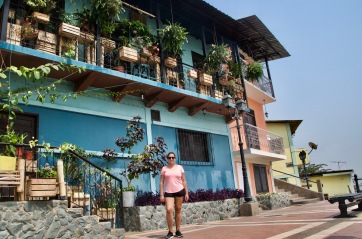 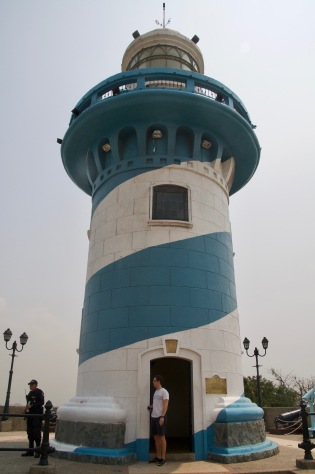 View from the lighthouse overlooking Guayaquil 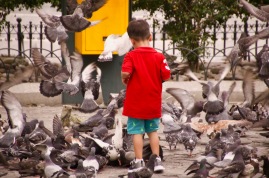 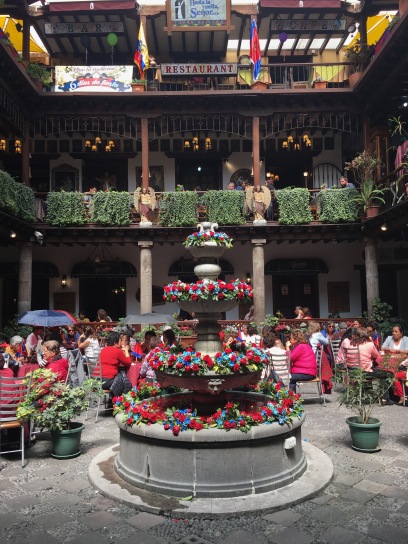 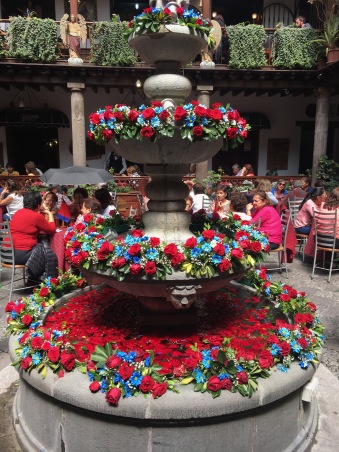 Fountain decorated for the Quito festival of Independence 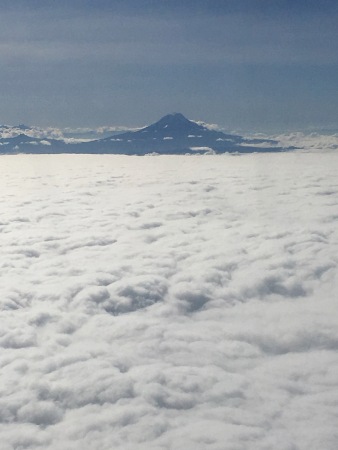 One of the many volcanoes surrounding Quito

One thought on “Guayaquil & Quito – Ecuador”