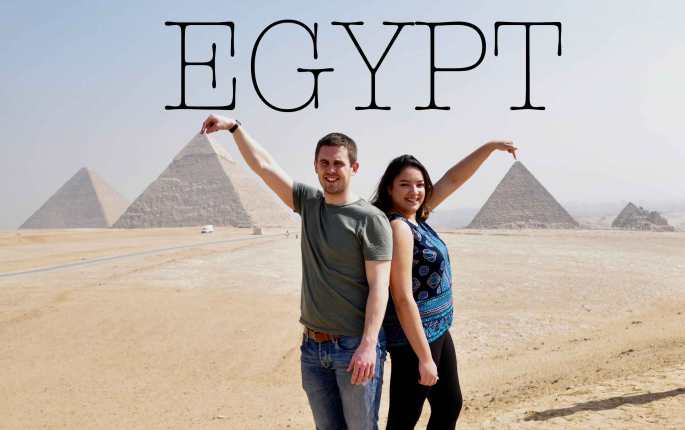 We managed to upload the video just before we left Cairo but didn’t have time to post it although now we’ve got a 4 hour lay over in Dubai and the wifi is decent!

Anyway, here is our first little film of what we did in Egypt (we are well aware it is not Oscar-worthy but it can only get better right?). Also, prep yourself for a little bit of camera shaking, and by a little bit, we mean from start to finish haha.

Thanks for reading and watching if you do! 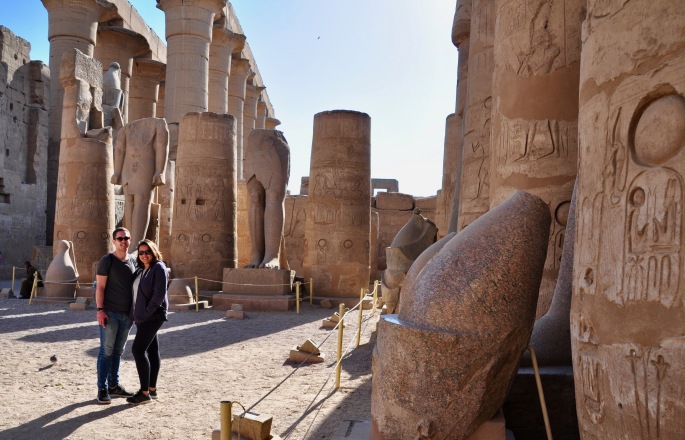 We got an uber at 4.30am to the airport in Cairo and took an hour flight south to Aswan. We stayed for two nights in the Nubian village; a small, colourful place that Dave said looked like a nursery. We were shattered when we arrived so had a chilled day taking a felucca (traditional sailing boat) 2 hours up the Nile to the Aswan botanical garden island (only accessed by boat). We  became avid bird watchers and saw pelicans and incredible Nile Kingfishers (who fly like hummingbirds)! The botanical garden was beautiful and peaceful and we enjoyed strolling through to meet our captain on the other side to take us back to the village. The next day we went to the Aswan high dam and saw the vastness of Lake Nasser. We visited the Tower of Syene and then later took a boat to Philae island where we walked round Philae temple. Aswan was sort of our relaxing couple of days where we spent time just sitting drinking tea or Limoon bel nana (lemonde with mint).

After our short stay in Aswan, we took a train 3 hours north to Luxor. Luxor is divided in to the East bank and the West Bank. The East is the lively part with shops, restaurants, museums and the 2 main temples. The West is very rural, mostly just farm land and then the mountains where you find the Valley of the Kings and Queens. We stayed on the West, it was quite a shock coming from Cairo (where we saw about 1 tree the whole week) to Luxor which was covered in lush greenery. We stayed in a little hotel where we were the only guests! We spent one day on the East bank where we mainly visited the two massive and impressive Karnak and Luxor temples.  We also visited Luxor museum which, to our surprise, we really enjoyed. The descriptions on all the artefacts were brilliant and detailed, and we even saw a mummy (seriously grim but also insanely cool). Back at the hotel, we spent much of our 3 days chatting to the hotel’s neighbour; Efie. A 77-year old, originally Swiss woman who moved to Luxor 15 years ago. She was bonkers and fabulous in equal measure and told us so many incredible stories including recently marrying a very weak 20 year old village boy to save him from being sent to the army (she divorced him a few months later). She was just generally an awesome lady, she even showed us round her house. Oh, and did I mention she recently decided to tattoo her lip line green?

Back to cultural things… on the West Bank we went to the Valley of the Kings where there are 64 tombs, we visited Ramses IV, Ramses IX and Merenptah. Ramses IV was the most spectacular with vibrant colourings on the walls still intact throughout the tomb. We then drove on, past Howard Carter’s house, and past many archeologists still at work! We went to the Temple of Queen Hatshepsut. The Queen is depicted with the features of a man (beard, large body) to show how powerful she was, as strong as the Kings.

We also went to Valley of the Queens where there are over 25 tombs but most are unknown who they belong to. The most famous tomb in the valley is that of Nefertiti but the entrance fee was £50 each so we didn’t go. We went to three different tombs instead where their colour was even better preserved that what we’d seen in the King’s Valley. It’s genuinely mind blowing that these tombs are over 3000 years old.

Our final temple was Habu temple where all the hieroglyphics and images are etched deeper in to the stone than usual, apparently because Ramses III feared the temple would be destroyed and the stones re-used.

So, that is the end of Egypt! We do have a little video of our time here. Our plan is to have a video for each of our twenty countries that we can make in to a film and watch back 20 years in the future! Stay tuned to see if the wifi prevails long enough to let us upload it… We are off to India later tonight for the next month! 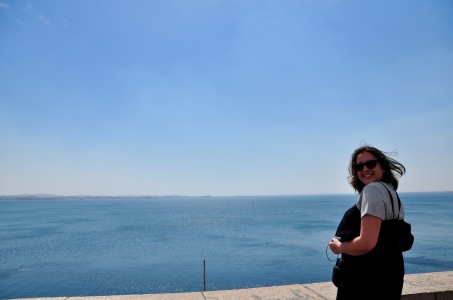 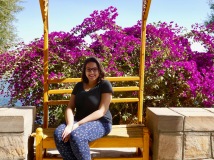 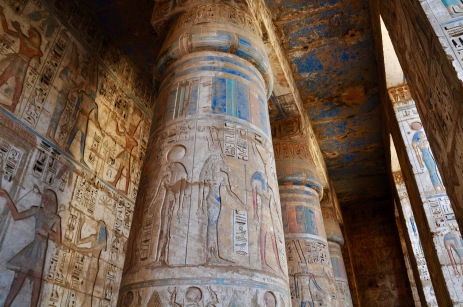 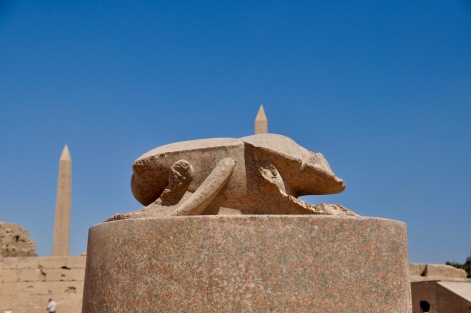 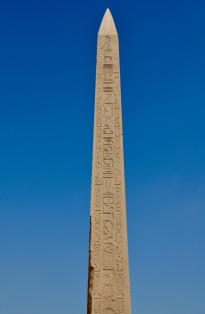 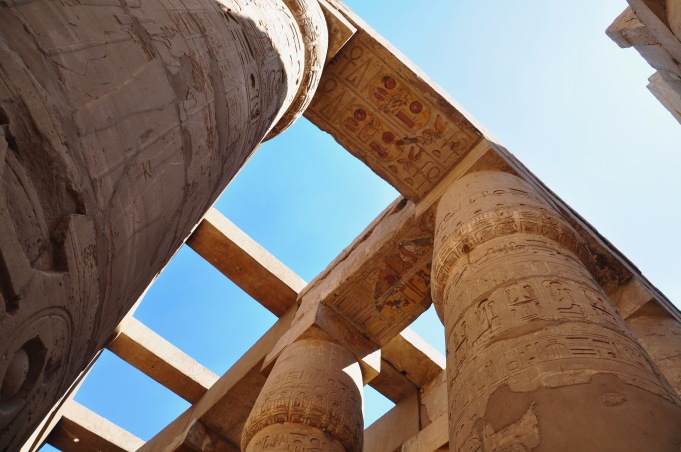 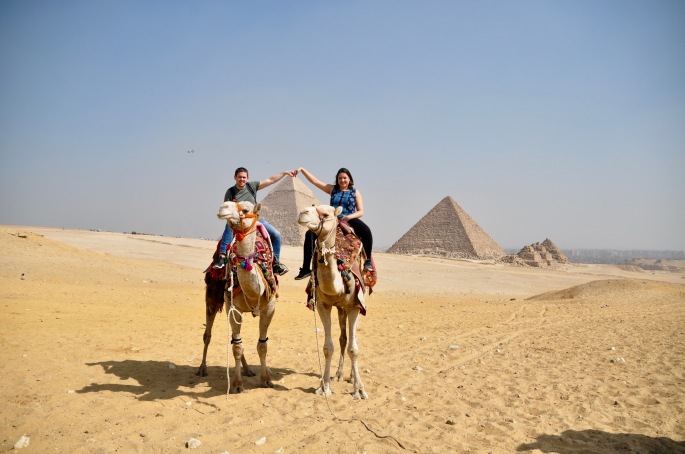 We made it to Cairo. We are staying with my Egyptian friend, Morouge. We’ve known each other for 12 years and went to school together in Switzerland. If you look up the definition of ‘Hospitality’ in the dictionary, it literally says ‘Morouge and her family’. Her apartment is lovely and is really central. She isn’t allowing us to use public transport (to be fair, we’ve seen the buses and they look terrifying). In Cairo, we’ve been using taxis or Ubers. Even for short distances because the roads are absolutely mental and we haven’t seen much in the way of well, pavements… The last Uber we took to go to the Egyptian museum, (about 15 mins drive) cost 12 Egyptian Pounds = 50p. Also, no cars seem to have seat belts, about 50% of drivers seem to use head lights and about 10% seem to indicate.

We are pretty much the only tourists we’ve seen so far. I’ve been told that I can pass for Egyptian loads but Dave sticks out like a sore thumb and is still waiting for this compliment. We went to Cairo Tower on the first day, (Egypt’s Eiffel Tower equivalent but inspired by a lotus design-wise). It gave us the perspective of how massive Cairo actually is. We picked a great day to go up as well given there wasn’t too much smog over the city and we were even able to see the pyramids in the distance.

We made a minor error when we went to the Egyptian Museum of Antiquities thinking that we would be able to get enough info from reading the signs rather than getting a tour guide. Turns out, erm no. Most signs read something along the lines of “carved limestone” or “papyrus paper”. It was still really interesting to see everything though, especially Tutankhamun and the artefacts found in his tomb. Later that evening we went out for dinner with a group of Morouge’s friends who were all lovely and very welcoming. We enjoyed chatting with them and seeing how different our lives were even though we’re all similar ages. Another night, we also went bar hopping with Morouge’s friends in downtown Cairo.

Our hands-down favourite part so far was visiting the Pyramids of Giza! Morouge took us on Saturday. (Egyptian weekends are Friday and Saturday, Sunday is their Monday). Morouge also organised a tour guide for us who was amazing. It’s inconceivable how huge they are until you actually go there. The base step/layer alone was only a little bit shorter than us. The whole experience was fascinating, who knew there are actually 9 pyramids on the Giza plateau, 3 main ones and 6 smaller ones adjacent. Dave and Morouge actually climbed down inside a mini one (however the small slanty tunnel was not for me). We rode camels too (in a legit camel zone where we ensured the camels were not mistreated and Morouge had a chat with the owner who said the only stick he uses on his camels is lipstick when he gives them kisses). Neither of us had been close to a camel before and again, we were in awe of how big they are; in my head, they were like big horses, but no, definitely bigger.

One evening we went to Khan el-Khalili, a market place/sook. It was so colourful, loud and busy.  We went for a lovely dinner there too. We’ve been trying as much as possible to eat proper Egyptian food. It mostly consists of carbs, so no complaints at all.

Enough for now. Our next post will be about us further South in Aswan and Luxor. Our wifi is fairly limited but we’ve managed to post the odd photo on Instagram, its @travelflavel. 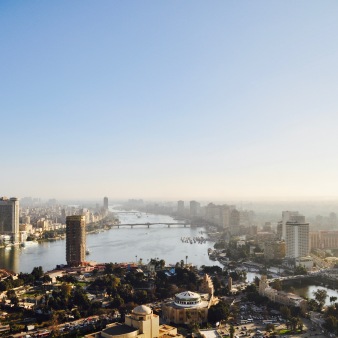 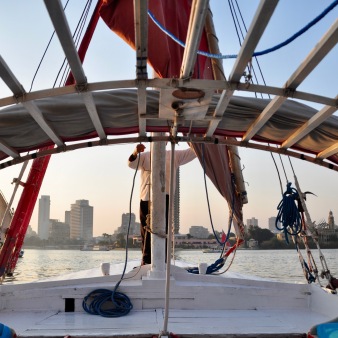 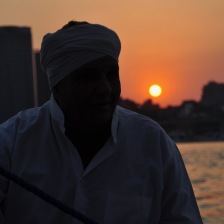 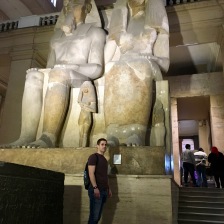 At the Egyptian museum 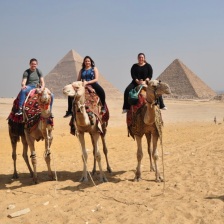 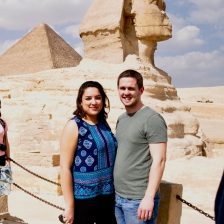 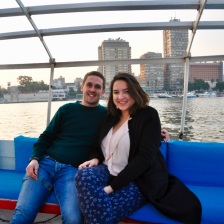 Boat on the Nile