If you’ve been reading our blog then you know we went to Bangkok a few weeks before Chiang Mai but we decided to put them together in a video. We’ll actually be back in Thailand next month where we’ll be visiting the Thai Islands. But for now, hope you enjoy seeing what we got up to. The elephants are undoubtedly our favourite part caught on film yet! Remember to watch in 1080p.

We were excited to arrive in Chiang Mai where we’d be spending a full five nights in one place, the longest stay we’ve had in the last 2 months! We stayed in a guesthouse just on the outside of Chiang Mai’s centre (a big square) near Chiang Mai Gate. There was an adorable little dog called Chanom (milk tea in Thai apparently). We were glad to be on the road just south of the main square as it was much quieter and more peaceful but within close walking distance to all the restaurants/night market etc. Unfortunately, when we left Myanmar, we said we hoped to be fighting fit. This certainly wasn’t the case. Dave had such bad food poisoning that he most definitely should have seen a doctor (but he is stubborn so obviously didn’t), I’m pretty sure he had salmonella. So for our first couple of days in Chiang Mai, Dave mostly just ran a high fever and slept (amongst other more unpleasant things). I only ventured out on my own for food rather than touristy things.

After a few days when Dave started to feel a bit better, we spent an afternoon at Chiang Mai’s Art in Paradise 3D exhibition. I have tried to drag Dave to numerous art galleries in London in vain but this one, he loved more than me. It was interactive where everything was a huge, 3D, realism painting where you became part of the art. Surprisingly we only saw about 2 kids in the whole place, it was mostly adults running around like toddlers (us included). Our favourite painting was a crocodile coming out the water and where you could lie on the ground and cling on to a branch, then rotate the photo sideways. Genius! (See below).

The next day, we woke up early and full of excitement for our day at the Elephant Nature Park. Though neither of us were 100%, we were determined not to miss this day. We were picked up from our home stay in a minivan with the other 8 people on our tour for the day. We were shown an absolutely harrowing video about the torture these rescued elephants had endured. Naturally, I spent most of the film trying to hold back tears (failing miserably and silently sobbing). Though this film was so hard to watch, it was undoubtedly partly what made the Elephant nature park so great; they really valued educating people. The film showed what they call ‘breaking the elephant’s spirit’ in order to tame them. A baby elephant is separated from their mother at about one year old and taken deep in to the jungle, away from tourists. They are chained, starved, beaten and tortured for a week and forced to obey the command of the Mahout. The Mahout must stay with the elephant 24/7 to stop the elephant trying to commit suicide by standing on its’ own trunk. This horrific process is also to make the baby forget it’s mother. Of course the torture does not end here, for the rest of their domesticated lives, they must always obey their Mahout and will be reprimanded if they don’t. So whether you ever consider going to a circus, an elephant show, or an elephant ride; consider what that elephant went through to turn it from a wild animal to a domesticated one. We will happily tell you we spent 12,000 Baht or £280  combined for this day; a hefty price tag that was worth every penny.

The Elephant Nature park is home to around 70 elephants who have been rescued from the logging trade, circuses, street begging and tourist riding, some elephants are blind and disabled. All of these elephants have been bought; each costs between 1.5 and 2 million Baht (depending on their age) which equates to around £35-50k. We chose to do the day called “Sunshine for Elephants” which entailed spending most of the day with a neighbouring park’s elephants. Lek (the founder) had educated the family who owned these elephants about how to treat them properly and convinced them to follow the lead of the Elephant nature park where there is no riding, no hooks, no chains and freedom. So these elephants are a sort of sub-family to Elephant nature park. Once we’d arrived, we washed our hands thoroughly (suncream/bug spray can contaminate their food) and waited for the elephants to arrive for feeding time. Then four huge, incredible, beautiful elephants slowly trundled over to us. I literally had my jaw to the floor and was in absolute awe. I’d never seen an elephant that close and was completely gob smacked. I’ve only just taken the photos off the memory card and as I was looking through them, I realised how embarrassing the majority of me are; I look like such a dweeb just grinning and staring at the elephants. It was amazing to be in such a small group and spend such intimate time with the elephants. We fed them watermelon and sugar cane; it was mesmerising to watch them curl their trunks gently around the food we handed them and then not so gracefully stuff it into their mouths and chomp it. Some of the elephants didn’t have teeth either – did you know elephants, unlike humans, lose and get new teeth 6 times in their lives – who knew?!

After their breakfast, it was time for a hike/walk through the jungle towards where we would stop for lunch. Now, if there’s ever motivation to keep up with a group, its definitely a 1 tonne elephant on your heels. Maybe we should adopt an elephant and I’d be better at hiking… Dave and I were at the back of the group, funnily enough everyone seemed to be pushing ahead to walk with our guide. We were given a bag of bananas each to walk with and to feed them again during the break. Two of the elephants blocked Dave’s path and wouldn’t let him walk on. The Mahout’s couldn’t really speak English so they didn’t reply to Dave when he asked what he should do (I just filmed him and laughed from a distance). Dave gave most of his bananas to the two and managed to squeeze out between them.

Their second feeding time was even better because we saw their personalities and how fussy they were. They’d only eat the sugar cane once they were sure there were no bananas left in our bags. A couple of the elephants also wandered off at this point to do their own thing; either throw dirt on their backs or rub their arses against trees, all very fascinating to watch. We walked on with the elephants to our lunch spot; where we had a lovely veggie buffet. After lunch, our guide said he had a surprise for us. 2 adults and a baby elephant joined us! We got to feed them more bananas and watch them interact and play with the water from the hand tap. We headed the way we came and then went in to the river to bathe the elephants. We were an even smaller group at this point because half our group didn’t want to get wet?! Basically it was just us and another couple and the elephants’ Mahouts bathing about five of them! I was tragically poor with my water bucket aim but the Mahouts were insanely good at it. It just turned in to a massive water fight where everyone was going for human and elephant alike. After a quick change, we then ended our day at the main Elephant Nature Park, meeting many more of the 70 elephants, watching them play in the mud, or eating (again) and hearing all their different heart breaking stories. Overall, it was an incredible day and we are so glad we chose to go to this genuine sanctuary and meet these fantastic creatures.

On our last full day in Chiang Mai we got a Songthaews (red pickup truck) up the mountain to visit the temple Wat Phrathat Doi Suthep. We technically got 2 different Songthaews as we decided to stop off and do a little hike to the Huay Keaw waterfall. We didn’t have high hopes because we’re in the peak of dry season (but we both secretly were hoping there was a decent trickle for us to swim). Definitely not. After a steep climb, there were just lots of rocks… We came back to the main road and drove up to the top. The road had so many hairpin bends whilst we went at full speed in an open back pickup truck that I very nearly vommitted on the poor boy sat next to me, fortunately I held it in. Wat Doi Suthep had two beautiful snake designs guarding each side of the steps leading up to the temple. We enjoyed looking round the temple and its surrounding area where you could look down over Chiang Mai from the mountain top. We headed back to our homestay but got dropped off at the nearby Saturday Night Market because the road was closed. It was the biggest market I’ve ever been to. It was a tourist’s paradise and even I (who has done SO well at not buying things) succumbed to a little bag I liked.

It’s soon Songkran in Thailand, the annual water festival celebrating the start of the new year. Unfortunately due to timings, we couldn’t stay for it. Chiang Mai is meant to be one of the biggest places to celebrate in all of South East Asia. Perhaps a blessing in disguise with all of our electronics, apparently everywhere you go, you’ll get water thrown on you by unsuspecting passers by. But they still celebrate it in Laos (called Pii Mai), our next stop. So we’ll let you know how that goes! 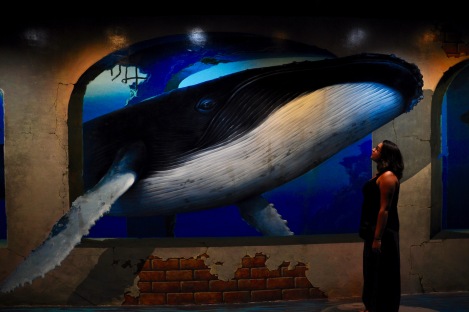 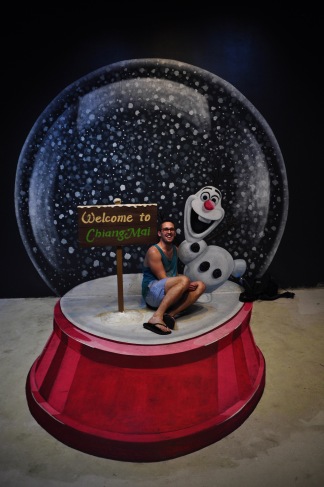 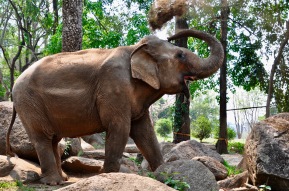 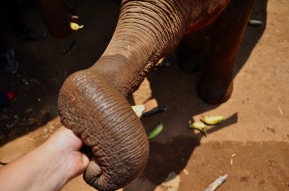 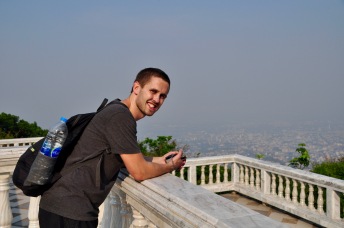 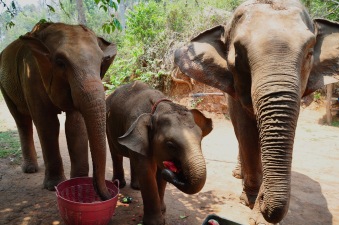 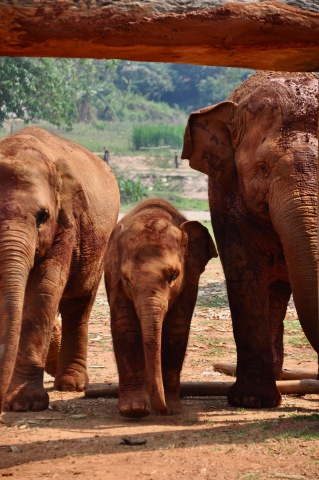