The first day of our 8 day sailing adventure around the Galapagos islands. We booked our tour with Happy Gringos travel agency in Quito last minute with a 40% discount. There are a myriad of boats to choose from ranging from basic to luxury, 14 to 100 passengers, routes sailing around the East or West of the archipelago and a couple of days to a couple of weeks. We chose the mid-range Eden yacht, a 78ft boat accommodating 16 passengers, with an 8 day route taking us West across the archipelago. The route was the selling point for us as we got to visit such a variety of islands and in turn, the unique wildlife found there.

Here was our route: 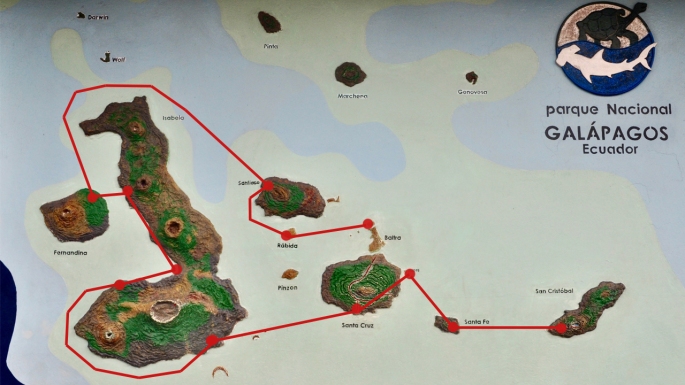 We got up at 4am in Quito in order to make it to the airport for our early flight to San Cristobal. We went through the airport smoothly paying our $20 transit fee and then $100 Galapagos park entrance fee on the other side. We arrived at 10:00am and had anticipated having to wait around until at least midday for other passengers on the next flight from Quito however we were pleasantly surprised when our guide Fabian showed up to collect us. We waited by the pier for the little zodiac boat to take us to the yacht in the marina and we saw our first sea lion completely unfazed by us sunbathing at the dock. The boat we chose was the Eden Yacht that holds 16 passengers, 7 crew and the Galapagos guide. We soon discovered however, that there were only 5 other passengers! We were shown to our cabin and we were a little disheartened to find bunk beds and our room being on the top deck. We had specifically requested a twin cabin on the lower deck so as to avoid sea sickness as we were both still scarred from the boats we had to take in Fiji! After unpacking, turns out there was a mix up and we did have a twin room lower down. We were so relieved as the motion is so much less down there, neither of us had to be on a bunk with no railing and we had so much more space to store our clothes/bags. We were happy campers as we met the rest of the people on board and settled down to lunch.

After a short 40 minute sail, we anchored by Isla Lobos. Lobos in Spanish is sea lion! Sea lions are easy to distinguish from seals as they have cute little ears. We got in to our wet suits ready for our first Galapagos experience of snorkelling. When we thought about going to the Galapagos, we never considered we would be wearing wetsuits throughout but the water temperature was cold, ranging between 18-21 degrees. That didn’t matter though because it was absolutely incredible and we got to swim with loads of sea lions! They were so playful, pirouetting in the water and blowing bubbles around us. We could not believe how close they were coming to us. It was such a magical experience. Out of nowhere, two giant sea turtles appeared too! Whilst we snorkelled, Frigate birds circled us over head and Sally Light foot crabs scattered along the rocks where we saw our first Blue footed Booby. We climbed back in to the little zodiac boat and as we drove back to the Yacht, we saw the crew trying to usher a sea lion off the back of our boat!

After an hour we had a quick change on the boat before heading back out to explore the island on foot. As we pulled up in the little dinghy, we couldn’t actually use the island’s steps as sea lions were sleeping there so we jumped along the side. As the island is made of volcanic rock, the surface was extremely uneven so we concentrated a lot on not rolling our ankles. We saw so many sea lions, quite a lot with their pups! We even saw one that our guide estimated was only 4 weeks old! The guide estimated that there were 250 just in the short stretch of rock and sand we were on! We also saw our first land iguanas, much darker in colour than the ones we’d seen in Guayaquil. Again we were lucky enough to spot a really small iguana who was only about 10 months old! All around the island, we saw Frigate birds floating in wind pockets in the sky barely moving at all. We also saw many of them nesting in tree branches. We saw many more females (white and black) than males who have a red neck. We were SO lucky to see one male Frigate bird doing the iconic puffed out red neck as a mating ritual. December is towards the very end of the mating season thus this was such a rare sight. Unfortunately it was a bit too far for a good photograph but we did see it with the naked eye. We got to see a few Blue footed boobies up close and personal too! The males are the ones that nurture the chicks and we saw one with a 3 week old chick! Apparently they did an experiment on the main land giving one bird the same Galapagos fish diet and the other bird a different diet. Only the Galapagos fish diet turned the feet blue, though it is also a sign of maturity as only the adults have the blue feet. The young are just fluff balls and honestly look like cuddly toys! As we walked along the island back towards our boat to head back for dinner, I turned to Dave and said that this might possibly be the best day of my life.

Join us next time for day 2 of the cruise! 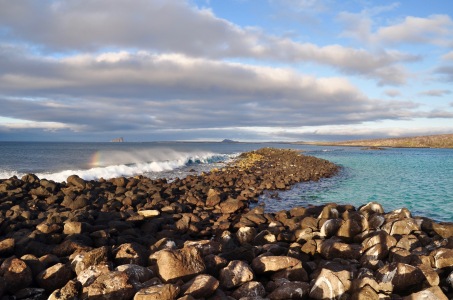 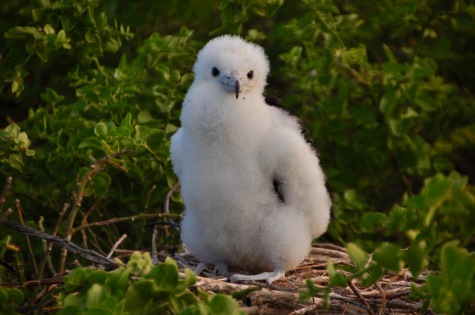 Our twin cabin on the Eden Yacht 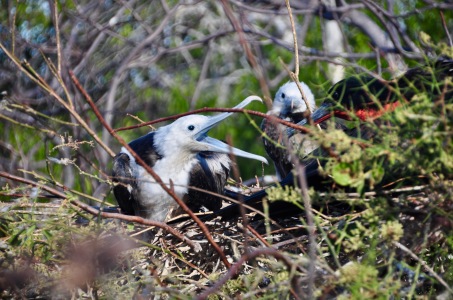 Young Frigate bird on the branches

Sea lions jumping in the ocean

The lounge of the Eden Yacht

The dock at San Cristobal island with a sea lion 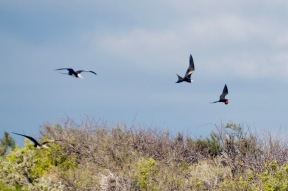 Blue footed booby with the chick

Sophie vs Sea Lion, look at the size! 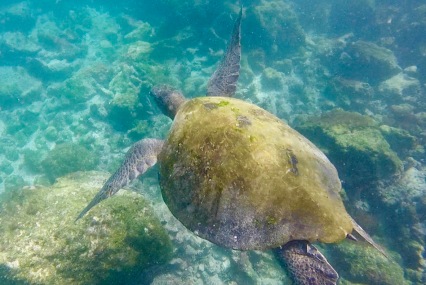 Sea lion and the sea turtle 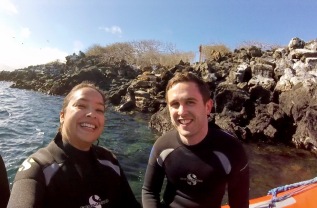 Happy after our first snorkel!

Sea lion on our boat