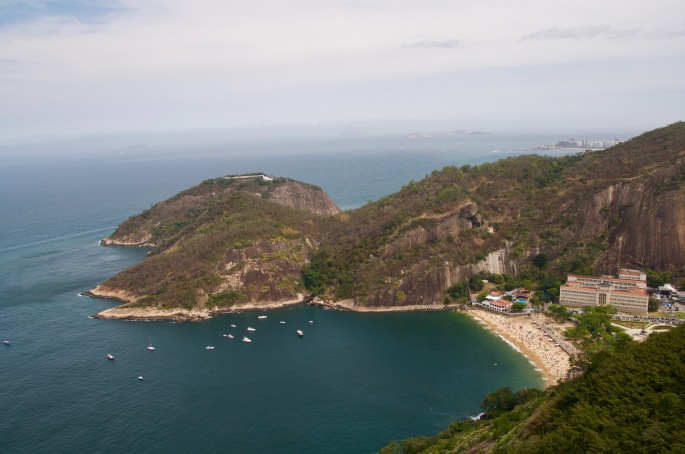 We left Ilha Grande with a private transfer company who dropped us to the door of our hotel in Rio. As we started to enter the city, we saw lots of armoured vehicles (including 4 tanks) rolling in the opposite direction along the highway which we suppose were due to the recent favela conflict. A lot of people visit the favalas on tours when they go to Rio but given the climate when we were there, we thought it was wise to stay away. Other than that, we were pleasantly surprised by how safe we felt in Rio. Perhaps due to the fact we stayed in Botafago, a notoriously safe area within close distance to the main attractions. We were also grateful to have the nearby shopping centre; Botafogo Praia Shopping, with it’s fast food court where we went for most meals.

We visited the two main attractions, Sugar Loaf Mountain & Christ the Redeemer. Sugar Loaf was only a short walk from where we were staying. The route to the base takes you past Botafago beach which was completely deserted apart from a few people doing outdoor exercise, but it has the perfect view of the mountain. We continued walking around the coast to the bottom of the cable car. It costs BR$80pp (£20) which is reasonable considering its a return on two cable cars & entrance to a top attraction. We were surprised by the fact that it wasn’t particularly busy at all. We went around midday and had some truly spectacular views over Rio with clear-ish weather whilst we were there. We were even more surprised at how developed the attraction was, there are cafes, ice cream parlours, even a watch shop at the top. It was also incredibly windy, so most of the photos have everyone’s hair blowing vertically in the air.

Our next visit was to the Christ the Redeemer statue. You get a train from Cosme Velho station which takes you up to the top. The station only serves the statue so it was straight forward buying tickets. It leaves every half an hour and costs $BR56 in low season which includes return and entrance. The train ride up was not as scenic as we thought it was going to be, even though we sat on the right hand side of the train as we’d read that had the best views, it was just lots of dense forest. We did think the forest, which is part of the national park, looked like a great place for wildlife spotting if you were brave enough to walk up the mountain. We were amazed you can get a lift up from the train and then even an escalator to basically right behind the giant statue! The statue of Jesus is 98 feet (30m) tall and his opening arms stretch to 92 feet (28m) wide. It was a little unfortunate that it was quite cloudy and muggy at the top. Though having said that, we were fascinated by the fact that it was nearly impossible to distinguish between where the sea ended and the sky began. It was a lot busier so we felt it was slightly less enjoyable than sugar loaf, but of course the views were still stunning and the statue itself is just so iconic.

Thanks for reading and join us next time as we jump on a plane and head to the border with Argentina for Iguacu falls!

View from the cable car

Cable car to the top of Sugar Loaf

Copacabana beach in the background

Looking across to the Christ statue 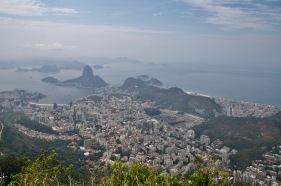