We sailed through the night, our longest navigation yet, and arrived at Isabela island. Isabela is the largest island of the Galapagos but only has a population of just over 2,200 people. Less than 1% of the land is privately owned, the rest of the land is national park. In the morning, we headed to Puerto Villamil where we caught the “chicken bus” 40 minutes inland towards our destination; the Volcano Sierra Negra. Sierra Negra is one of the most active volcanos in the Galapagos, last erupting in 2005. The chicken bus was sort of a converted truck with wooden benches in the back and open sides, although surprisingly quite comfortable.

We got off at the bottom of the volcano and started our hike, which was the most strenuous of the all the Galapagos walks so far, but by no means particularly difficult. We were headed to see one of the largest calderas in the world. It is essentially numerous collapsed volcanoes which make about a 10km2 crater. The depression is situated up in the highlands so it was very misty and a bit wet which didn’t bode well for the views at the top. There wasn’t much in the way of wildlife on the walk up other than quite a few of Darwin’s finches. Whilst it was an impressive sight, we only got to see glimpses of it through the mist. We waited for it to pass and managed to get a slightly clearer view but still a bit foggy.

Back at the port, we had a bit of time to wander round. We went along a short mangrove boardwalk that was lined with seals and marine iguanas. Back by the beach there were quite a few benches where huge sea lions had climbed up and made themselves comfortable for a nap. Whilst we waited for our little zodiac boat at the pier, we saw an Eagle Ray gliding through the shallows. The Galapagos waters are just so incredible that you can see such fascinating animals even from land!

After lunch, we headed back out to see the Giant Tortoise rearing centre that focused on species from Isabela island. It wasn’t as educational as the Santa Cruz research station but we did get to see tiny, preserved tortoise embryos of 1,2,3 and 4 months! It was really interesting to see the shell growing even within the egg as it is easy to forget that the shell ultimately is a bone. The highlight was when the guide brought out a gorgeous 7 month old baby tortoise, it was smaller than the palm of a hand, and so crazy to think it will grow to 250kg!

Isabela is the only island with multiple species of giant tortoises. The volcanic terrain and different environments have allowed up to 5 different species to evolve. The Cerro Azul tortoises have domed shells, the shortest limbs and are some of the biggest found in the Galapagos as they live in a lush environment with plenty of food. The nearby Sierra Negra tortoises however, live in a dry habitat with limited food so they have evolved to have longer limbs and necks to be able to reach the cactus plants, their primary food source. They also have the most unusual flattened saddleback shells which enable them to further elongate their necks (see photo below!). They actually had to be rescued back in 1998 as they were surrounded and trapped by lava following an eruption in Cerro Azul.

From the breeding centre, we walked along a boardwalk to where there are little salt and fresh water pools, home to Galapagos Flamingos! What’s special about the Galapagos Flamingo is their colouring. The most accurate description would be a pink stabilo highlighter! It was fascinating to watch the flamingos sweeping their heads back and forth as they searched for their favourite food – brine shrimp. We had a little bit of free time to wander round the tiny Isabela town, the last bit of civilisation we would be seeing for the rest of the cruise. We walked along the beach and saw the biggest group of marine iguanas we’ve seen yet, easily at least 50, mostly young ones with one massive adult! We also poked our heads in the Church which had stained glass windows featuring the animals of the Galapagos and right at the alter, there was a statue of Jesus in the tropical sky looking down on the ocean, beach and animals. It was interesting to see the very animals that sparked the theory of evolution inside a church. We then headed back to our yacht aboard the zodiac where we saw our first Manta Ray gliding near the surface!

Thanks for reading and join us for the next day of the cruise.

The second largest caldera in the world

Dave getting on the “chicken bus” 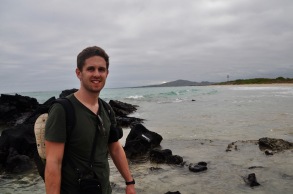 A black iguana contrasting with the red crab

Perfect reflection of a flamingo

The mangrove salt water lake is home to multiple flamingos 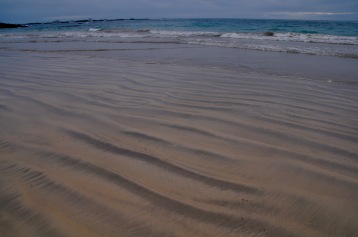 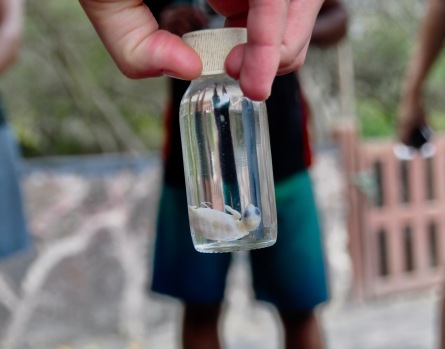