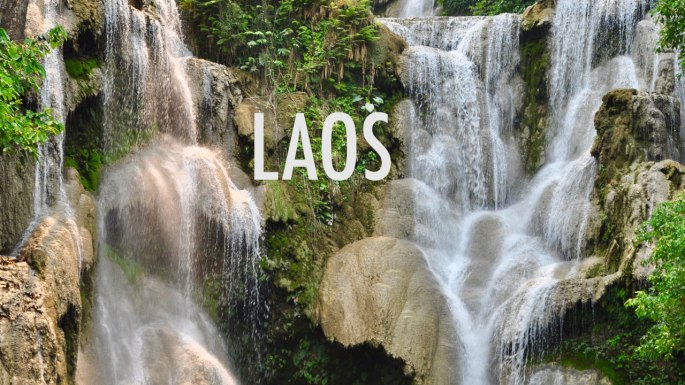 Here’s our video from our week in Laos. I didn’t take as many photographs in Laos as I normally do (due to our main activities being in/around water) so we are happy to have this little film to capture our memories. Personal highlight was seeing how much water people actually chucked on us in Vientiane during the water festival (you can see why we couldn’t have any camera other than the GoPro)!

Please watch in 1080p and thanks as always for following along. 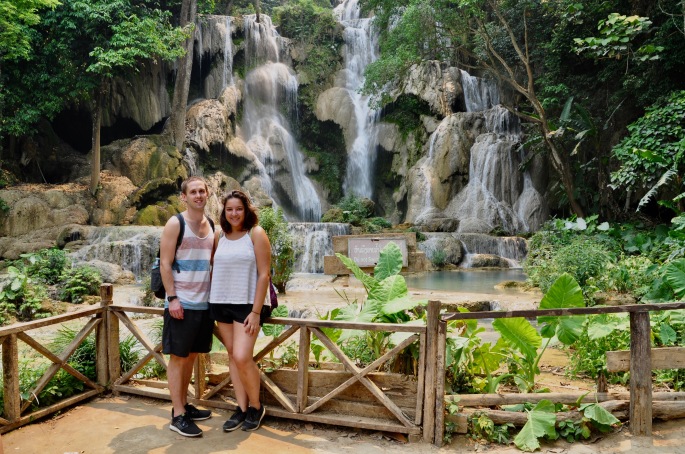 We arrived in Laos for our shortest country trip yet, only 8 days. The one hour flight from Chiang Mai was honestly the worst flight either of us had ever been on. The turbulence was insane, we literally flew off our seats and the poor woman in front was in tears. Laos was the one of the places we were dubious about Visas on arrival. We were told it would be $35 each and to pay in USD. We exchanged our cash in Chiang Mai and I insisted we got a tiny bit extra in case. Thankfully we did as they charge an extra dollar per person for ‘processing’.  They also charge an extra dollar if you don’t have a passport photo, fortunately we’ve got a whole wad of mug shots in our bags. So those extra $2 made all the difference and we arrived smoothly.

We decided to visit the three main cities for our stay, starting in Luang Prabang and ending in the capital, Vientiane. We still only booked 2 nights for when we arrived and left the rest open. We stayed in the most amazing hotel, a welcomed change considering we now think of having hand soap as a luxury. The room (still less than £10pp a night) can only be described as regal; everything was made from beautiful wood and we had a gorgeous wooden balcony overlooking a tributary of the Mekong river. We loved it so much we decided to stay another night.

On our first day, we went to Kuang Si Falls. There’s also a bear sanctuary at the base that you have to walk through. The bears were all rescued from the Laos bile trade. Though we were assured it was a legitimate sanctuary and the bears were happy now, we still couldn’t help but think their enclosures were quite small. I suppose the better of two evils though. Anyway Kuang Si Falls was absolutely beautiful. I was in awe just at the tiny 1 metre falls and pools at the base but if you continue up a bit further you get to see the main waterfall which was spectacular. I was happy with that and just wanted to swim in the pools at the bottom but Dave insisted we hike up to the top instead. I very bitterly agreed and it was actually quite a hard ascent (well for me at least), the fact that it was 39 degrees didn’t help either! But we made it to the top and had a little swim in the icy pools alongside the little fish that inhabited the waters. We had quite an impressive view from the top looking down on the tree canopies and if we peered over the edge we could see the start of the water falling down. We’d had a great day but sadly when we came back down the waterfall, we saw a horrific accident where a man died of a heart attack and people were trying to resuscitate him.

On our final day in Luang Prabang we went to the UXO visitors centre. The UXO (unexploded ordinance) centre was created by a government charity that strives to educate villagers on the dangers of the bombs and to disable as many of them as they can. It was quite an educational trip; I had no idea Laos has more unexploded bombs than anywhere else in the world. One person dies every day from them.

In the afternoon, we just played in the river. From afar, the current didn’t look too strong but when we actually got close, it was a different story. We stayed quite close to the edge and were very wobbly walking through the river to cross over. As always, there was a bunch of local kids who made it look so easy! We were staying right next to the Bamboo bridge, which is self explanatory but interestingly is only there for a few months of the year during dry season and has to be rebuilt every year. You have to pay a small price (50p) to cross over to help fund the rebuilding. We crossed in the evening looking for a restaurant we’d seen on trip advisor but it was shut and instead we stumbled upon another popular local place. It’s speciality was Laos fondue. Your table opens up and you’re basically given a fire and a barbecue/pot combo to cook your own meal. They give you a basket of fresh raw veg and noodles to put in to the broth and raw seasoned chicken to grill on the barbecue part. An interesting concept and was nice to try something different. We also both said if we get food poisoning, we’ve only got ourselves to blame (fortunately we didn’t!).

The main mode of transport between places in Laos seemed to be minivans and my God, do they get their money’s worth! There would be 15 people packed in to these little mini vans, including 2 sitting next to the driver! Even though the roads were very bumpy and at one point my glasses literally flew off my face as we soared over a pot hole, the journeys were shorter than what we’ve been doing, so only 4 hours was bearable.

Even in Luang Prabang, our first impression of Laos was that it was the Magaluf of South East Asia. When we arrived in Vang Vieng, this impression was immediately solidified. It definitely has the biggest drinking culture (I’m still going well with my alcohol ban) and was full of rowdy tourists, and locals alike. On our first day we decided to get a tuk-tuk to the Blue Lagoon, which was apparently a top destination. I have to say it was not at all the idyllic haven we’d imagined. It was essentially a glorified out-door swimming pool with lots of drunk people partying. The best part of the Lagoon wasn’t the Lagoon at all but rather the half hour ride to get there. The landscape of Laos is truly beautiful. I grew up in Switzerland so I’m used to mountains, but these mountains were like nothing I’d ever seen, they were so tropical. They are what I call David Attenborough mountains.

Vang Vieng is a place for outdoorsy activities so we booked an adventure day (only £7 all in with food) where we went Kayaking and Tubing in a cave. Spoiler alert, I hated the cave! Dave and I have only ever Kayaked on a flat body of water, never on a river with a current so that was quite fun.  Loads of people in our group capsized. We tried to help one pair by grabbing their lost oars except we weren’t paying attention and went straight in to a tree hanging over from the bank. We tried to duck but failed miserably and both got smacked in the face by the tree but fortunately we still didn’t capsize!

The cave. Oh the dreadful cave. We had naively assumed that cave tubing would be in a lit cave but we were given head torches as we prepared to get on our rubber tubes. As it got darker in the cave I realised my head torch was crap so Dave kindly swapped. There was a rope through the cave that you pulled yourself through floating on the tube; that was fine and quite enjoyable. The horrific part was when we got inside the cave and were told to dismount and that we were going to walk through. It was pitch black (apart from the shite head torches) and so unbelievably slippy. Absolutely zero health and safety standards. We were also in flip flops which made it so much worse. I ended up having a panic attack and still had to get out the cave whilst in a terrible state. You had to climb through jagged rock holes and I whacked my shoulder (which is now still bruised). Fortunately the walk in the cave wasn’t too long and I managed to get out okay. After I’d stopped hyperventilating, shaking and crying we rejoined the rest of our group for lunch and lazing in a hammock until it was time to kayak back to the town.

Our last city in Laos was Vientiane. We arrived for Lao New Year (Pi Mai)/ the water festival. New year basically means that most of the city shuts down for a three day bender with lots of water fights. There were loads of outdoor clubs blaring drum and bass with sprinklers and hoses everywhere. The streets were lined with people armed with water guns, hose pipes and buckets of water. It was impossible not to go out and get absolutely soaked. Fortunately we bought a water proof bag for wallets/phones.

Thanks for reading, quite a long one, sorry! 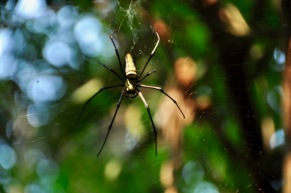 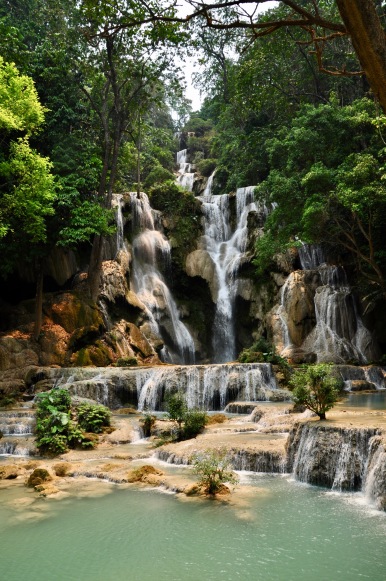 Bear rescued from the bile trade

The top of the falls 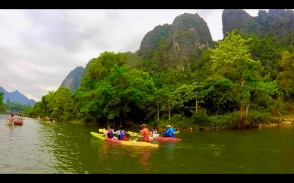